The following appeared on Twitter. Like most messages of this sort, it migrated quickly to other social media sites.

“Harley Davidson CEO Matthew S Levatich says: ‘Our decision to move some of our operations is 100% based on President Trumps tariffs. Mr. Trump knows nothing about economics and even less about trade. The man is a moron.”

“It’s shameful we live in a time when people create fake quotes. There’s one attributed to me on Twitter. I have not, nor would I ever speak about the President of the United States or anyone else in that way.” – Matt Levatich, President and CEO, Harley-Davidson, Inc.

Mr. Levatich is right, it is a shame that we live in such a world. Though the truth is, this sort of behavior is nothing new.  Roman-era graffiti has been found spreading lies about political officials. British anti-Colonial propaganda often depicted the miscreants in Boston colony as violent thugs, such as the image below of the Excise-Man being tarred and feathered. 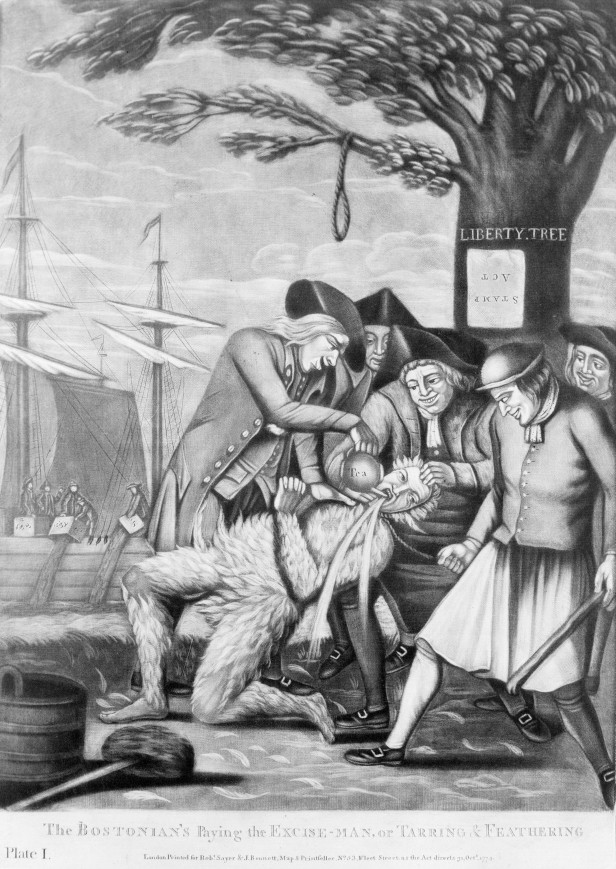 Abraham Africanus I is a tract which details the pact between Abraham Lincoln and the Devil making him the dictator of the United States.  This tract was published by the Copperheads, Northern Democrats who opposed the war with the Confederacy. It is followed up with The Lincoln Catechism lampooning Lincoln, Abraham Africanus I, and accuses the Republican Party of wishing to rename the United States, New Africa.

Let’s fast forward to today… we are bombarded with information. We are literally  drinking from a firehose.  Few people have the time or inclination to check facts. Many of us are simply tired.

Some people complain about the media, and the media has, by and large, failed the Ameriocan people.  However, the media is the least of our issues.  Social media is still the wild-wild-west and just about anything goes.  Yes, there are some clear satire sites – the Onion, Duffleblog, etc.  But many times, one simply does not know where the information on their Facebook or Twitter feed is coming from. It has also become much more difficult to distinquish truth from fantasy.

Even so, we must be careful about what we disseminate.

This morning, I did post the supposed quote from Mr. Levatich. However, I did so with a clear disclaimer that the quote was not vetted, that I could not confirm whether it was true or not. Like most people, at the time, I had a lot to do. If you see something like that, in the current climate, as a responsible adult, as a citizen and not a subject, you MUST question it.

And it doesn’t matter from what side it comes. Damnit, George Washington himself warned of the dangers of sectionalism and political parties in his farewell address – should we not listen???

“In contemplating the causes which may disturb our Union, it occurs as matter of serious concern that any ground should have been furnished for characterizing parties by geographical discriminations, Northern and Southern, Atlantic and Western; whence designing men may endeavor to excite a belief that there is a real difference of local interests and views.”

“They (Sectionalism and ultimately political parties) serve to organize faction, to give it an artificial and extraordinary force; to put, in the place of the delegated will of the nation the will of a party, often a small but artful and enterprising minority of the community; and, according to the alternate triumphs of different parties, to make the public administration the mirror of the ill-concerted and incongruous projects of faction, rather than the organ of consistent and wholesome plans digested by common counsels and modified by mutual interests.”

In the early days of the Republic, concerns were divided more along regional lines than political party lines. Today, sectionalism has largely, though not completely been replaced with party loyalty. It is a loyalty that is misplaced. A loyalty that corrupts loyalty to the Constitution and turns men and women of both parties into traitors – and no, I don’t think that’s too strong a word –  to the Constituion and the principles upon which this nation was founded.

The American political system has become polarized into factions, less interested the mutual interests of the nation, and more interested in pushing through their own political dogma, whether that dogma is beneficial the whole, or not.

To that end, those who are loyal to those parties are using modern means of communication and bombarding the American public with false and misleading information. In many cases, it’s those same so-called “leaders.” However, in many cases it is not.

If we’re going to be good citizens, good Americans, good citizens of the Shining City on the Hill, we must hold truth paramount above all else. There is no such thing as an alternate truth – that is called a lie. We must all fight against the dissemination of political propaganda designed to divide us.

Even in the face of defending a person we find reprehensible.

“If I were to run, I’d run as a Republican. They’re the dumbest group of voters in the country. They believe anything on Fox News. I could lie and they’d still eat it up. I bet my numbers would be terrific.” – Donald Trump – People Magazine interview in 1998.

As much as it sounds like something Donald Trump would say (and I challenge anyone to argue with me about that – “I could stand in the middle of 5th Avenue and shoot somebody and I wouldn’t lose voters…” – D.T. Jan 23, 2016 – Iowa campaign rally, “He’s a war hero because he was captured. I like people that weren’t captured, OK?” – D.T. on Senator John McCain at the Family Leadership Summit in Ames, Iowa, on July 17, 2015, “Grab them by the pussy,” and a plethora of others:

While Trump appeared fairly regularly in People Magazine during the period in question, there was only one problem. This interview never happened. Let me say that again…

And I say that not as someone who has relied on others to do this research. I searched People Magazine’s archives myself for this interview, any hint of it. It does not exist. It never happened.

And yet, rabid left-wingers argued with me tooth and nails. Shame on you guys…

NOW, let me be clear, I firmly believe, and can provide a fair amount of evidence – though not enough to prove beyond a reasonable doubt – that the partitioning of American politics into the false dichotomy of right and left is a long-running, possibly very-long running plot that began with the Business Plot (AKA, Wallstreet Coup, Business Coup) in 1933-34 – There are plenty of historians who disagree with this and claim that Butler was party to a “gigantic hoax.”  I find it difficult to believe, barring some new evidence, that USMC Major General Smedley Butler, two-time Medal of Honor winner – could be easily hoodwinked.

For instance, on December 3, 2017, Edgar M. Welch drove from Salisbury, N.C. to Northwest Washington, D.C. to Comet Ping Pong, a pizza shop in which, someone, somewhere started a rumor that Hillary Clinton – that reviled libtard monster – was running a child-sex ring. Welch, hearing of this, decided to “self-investigate” and grabbing his AR-15 and a pistol he drove for six hours….  This, even after reputable news organizations debunked the stories, and even after being warned by associates to not follow through with his plan, Welch convinced that he must rescue these non-existent children, still persisted.

Shots were fired – police reported three shots inside the restaurant. Welch was taken into custody. He was eventually sentenced to four years in prison after pleading guilty in March 2018.

The left has its fair share of lunatics as well. On June 14, 2017, in Alexandria, Virginia, James Hodgkinson opened fire on Congressional Republicans at a softball game.  A Congressman, Steve Scalise and a police officer, Crystal Griner, and two others were shot. Hodgkinson, a Bernie Sanders supporter, had publicly declared his hatred for both Donald Trump and Republicans in general.

Now, let’s be clear, the amount of left-wing violence of this nature is dramatically less than it is for right-wing wingnuts. In fact, according to the FBI and the National Terrorism Database, since 2000, 74% of all terror attacks in the United States were committed by Right-wing organizations. The remaining 36% is scattered through all other affiliations.  The Left simply has not been as organized since its heydays in 1970’s.

We like to think that this sort of thing can’t happen. That normal people don’t do this sort of thing. You’re right. However, Hodgkinson was described by people who encounted him as “Not scary, ” and  Welch as “Soft-spoken and polite.”  So, can you see the danger of spreading fake and inflammatory stories? When even seemingly normal (whatever htat is) people can be led to dramatic and drastic action? Thethere are plenty of people who are easily swayed and sometimes swayed to action, sometimes violent action, by these lies.

Leslie Harris, a former president of the Center for Democracy & Technology argues that “…facts don’t change people’s minds.” And in this case, we clearly see that.

But it’s not just this case. Time and again, people are willing to believe things that confirm their own biases. When those things are supported by repetition … well, even today, there are people who believe that this all is a cover-up to hide the crimes that Clinton committed against those “poor children.” The purveyors of fake news, purveyors of propaganda, are terrorists. They are political terrorists of the worst sort.

I’ll give you three shots at the answer.